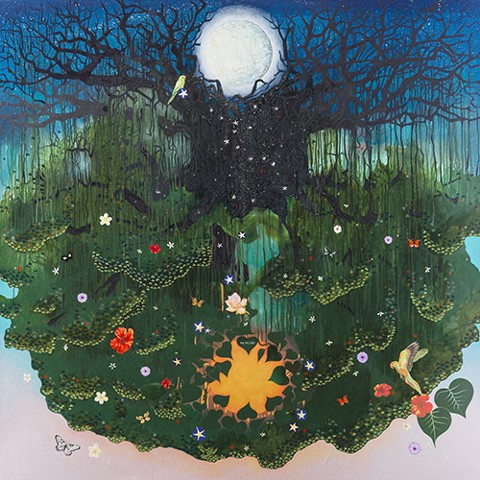 Inverted Tree: The Yoga of Purushottama
acrylic on canvas
60x60"
next >

1. They (wise people) speak of the indestructable Peepul tree as having roots above and branches below, whose leaves are the Vedas; he who knows it alone is a Veda-knower. 2. Below and above are spread its branches, nourished by the Gunas; sense-objects are its buds; and below in the world of men stretch forth the roots, originating action. 3. Its form is not perceived here as such, neither its end, nor its origin, nor its foundation, nor its resting place; having cut asunder the firm rooted Peepul-tree with the strong ax of non-attachment... 4. Then that Goal should be sought after, where having gone, none returns again. I seek refuge in that "primeval Purusha" from which streamed forth the ancient/eternal activity (or energy). 5. Free from pride and delusion, victorious over the evil of attachment, dwelling constantly in the Self, their desires having completely retired, freed from the pairs of opposites, such as pleasure and pain, the undeluded reach that Goal Eternal. 6. Nor does the sun shine there, nor the moon, nor fire: to which having gone they return not; that is My Supreme Abode. 7. An eternal portion of Myself having become a living soul in the world of life, and abiding in Prakriti draws (to itself) the (five) sense with mind for the sixth. 8. When the Lord (Ishvarah/Self) obtains a body, and when He leaves it, He takes these and goes (with them) as the wind takes the scents from their seats (the flower). 9.Presiding over the ear, the eye, the touch, the taste and the smell, so also the mind, He enjoys the sense objects. 10. Him who departs, stays and enjoys, who is united with the Gunas, the deluded do not see; but they behold who possess the Eye-of-Knowledge. 11. The seekers striving (for perfection) behold Him dwelling in the Self; but the unrefined and unintelligent, even though striving, see Him not. 12. That light which is residing in the sun and which illumines the whole world, and that which is in the moon and in fire- know that Light to be Mine. 13. Permeating the earth I support all being by (My) energy; and having become the liquid moon I nourish all herbs. 14. I having become (the fire) Vaisvanara, abide in the body of beings, and associated with Prana and Apana digest the four-fold food. 15. And I am seated in the hearts of all; from Me are memory, knowledge, as well as their absence. I am verily that which has to be known in all the Vedas; I am indeed the author of Vedanata, and the "knower of the Vedas" am I. 16. Two Purushas are there in this world, the Perishable and the Imperishable. All beings are the Perishable and the Kutasthah (the Witness) is called the Imperishable. 17. But distinct is the Supreme Purusha called Highest Self, the indestrictable Lord, who pervading the three worlds (waking, dream and deep sleep), sustains them. 18. As I transcend the Perishable and am even higher than the Imperishable; therefore, I am declared as the Prushottama (the Highest Purusha) in the world and in the Vedas. 19. He who, undeluded, thus knows Me, the Supreme Purusha, he, all-knowing, worships Me with his whole being. O Bharata 20. This , this most secret science (teaching) has been taught by Me, O sinless one; knowing this, a man becomes wise, and all his duties are accomplished, O Bharata.